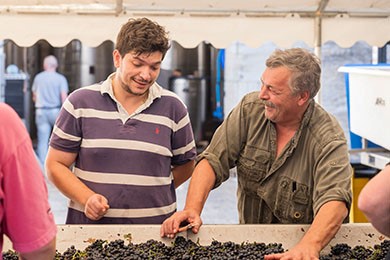 Maxime Cheurlin belongs to the sixth generation of the winegrower family Noëllat. Great-grandfather Georges Noëllat gave his name to the domain. After his death in 1982, his wife Augustine Noëllat, known as Marcelle, took over the management of the winery until 1986. Her daughter Marie Thérèse Noëllat married Jacques Cheurlin, a winemaker in Celle sur Ource in Champagne. He took over the management of the Vosne-Romanée estate from 1986 to 1990. After her divorce in 1991 Marie Thérèse Noëllat returned to Burgundy back and joined until 2009 the succession of her husband. They have two children, Francis and Patrice Cheurlin. Francis Cheurlin, his father, built a new winery in Champagne. Maxime himself was more interested in the production of wines and especially in Burgundy wines and so he took over the Vosne-Romanée winery from 2010. The vineyards belong to the family since the end of the 19th century. For the Vinification of all wines, except for the Grand Cru "Les Échezeaux", which claims to produce almost 30% of the complete harvest, the berries are completely de-stemmed. Then the wine comes in barrels. The proportion of new barrels is depending on the Appellation 30% to 100%, which depending on the type of wine different Toastings (roasting the barrels over the fire) are subjected. The wines mature in barrels for 15 months and then in wine tanks for 3 months before being bottled. So they can rest and do not have to be filtered before bottling.
Request wines of the winemaker

S –
soutirage
French term for racking, or moving clear wine off ist sediment and into a clean container. It can also be used for the wine serving process of decanting.
more
B –
bunch rots
Occur in vines all over the world and can be caused by many species of funghi including yeasts and bacteria.
more
C –
Chevalier-Montrachet
Great white Grand Cru in Burgundy's Côte d'Or.
more
D –
dégorgement
French term for the disgorgement operation at the end of the traditional method of sparkling winemaking
more
P –
premier cru
Or premier cru classé, is a cru judged of the first rank, usually according to some official classification. The direct translation of the French term premier cru, much used in the context of Bordeaux, is first growth. In Burgundy, scores of vineyards are designated premiers crus, capable of producing wine distinctly superior to village wine but not quite so great as the produce of the grands crus.
more
C –
casein
The principal milk protein, is used by winemakers as a fining agent particularly useful for removing brown colours from white wines. It is used also in the clarification of young wines.
more
S –
Spätlese
Means literally "late harvest" but, as a so called Prädikat, is officially defined by grape sugar at harvest.
more
O –
oenologist
A study is the main requierment for this title.
more
B –
bouquet
It is used loosely by many wine tasters to describe any pleasant wine smell or smells.
more
B –
barrel fermentation
Winemaking technique of fermenting grape juice or must in small barrels rather than in a larger fermentation vessel. The technique is used principally for white wines because of the difficulty of extracting through a barrel's small bung-hole the mass of skins and seeds which necessarily remains after red wine fermentation.
more
P –
pigeage
French term for punching down, the winemaking operation of breaking up and submerging the cap of skins and other solids during red wine fermentation to stop the cap from drying out.
more
R –
right bank
An expression much used of that part of the Bordeaux wine region that is on the right bank, or north, of the river Dordogne. It includes, travelling down river, Castillon Côtes de Bordeaux, Francs Côtes de Bordeaux, St-Émilion and its satellite appellations, Pomerol and Lalande-de-Pomerol, Fronsac and Canon-Fronsac, Bourg, and Blaye.
more
A –
AVA
The acronym for American Viticultural Area and the US relatively rudimentary answer to France's appellation Contrôlée.
more
B –
Bordeaux
Important French port on the Garonne River. Bordeaux gives ist name to a wine region that includes the vineyards of the Gironde département and, as such, the wine region that produces more top -quality wine than any other region.
more
L –
left bank
An expression for that part of the Bordeaux wine region that is on the left bank of the river Garonne. It includes, travelling down river, Graves, Sauternes, Barsac, Pessac-Léognan, Médoc and all the appellations of the Médoc.
more
V –
vigne
Is French for a vine, and sometimes vineyard.
more
S –
Selection
A Prädikat that means literally "selected harvest" but is officilly defined by the must weight at harvest.
more
B –
brut
Adapted by the champagne industry for wines made without (much) added sweetening or dosage. The upper limit for the resiudual sugar of a brut champagne has been reduced from 15 to 12 g/l.
more
U –
ultra brut
Brut Nature, Pas Dosé or Zéro Dosage. Residual sugar under 3g/lit
more
M –
Menetou-Salon
Is just west of, and very much smaller than, the much more famous Sancerre, near the city of Bourges, producing a not dissimilar range of red, white, and rosé wines which can often offer better value.
more
G –
grafting
The connection of two pieces of living plant tissue so that they unite and grow as one plant, has been a particularly important element in growing vines since the end of the 19th century.
more
B –
bricco
In the dialect of the north west Italian region of Piemonte, indicates the highest part of an elevation in the landscapeor, in particular, a vineyard with a steep gradient at the top of a hill.
more
B –
BYO
Stands for "Bring Your Own" (wine) and is a type of restaurant most common in Australia and New Zealand, where the term was coined.
more
M –
Montrachet
Or Le Montrachet, the most famous Grand Cru white burgundy, the apogee of the Chardonnay grape produced from a single vineyard in the Côte de Beaune district of the Côte d'Or.
more
B –
Bolgheri
Small town in the Tuscan Maremma made famous by Marchese Mario Incisa della Rocchetta, who planted Cabernet Sauvignon vines for a house wine a early as the 1949s an his San Guido estate, labelling the resulting wine Sassicaia.
more
Previous Next
Wine purchasing
Our wine purchasing process is straightforward: simply send us a detailed list of the wines you wish to sell.
more Template PDF Template Excel